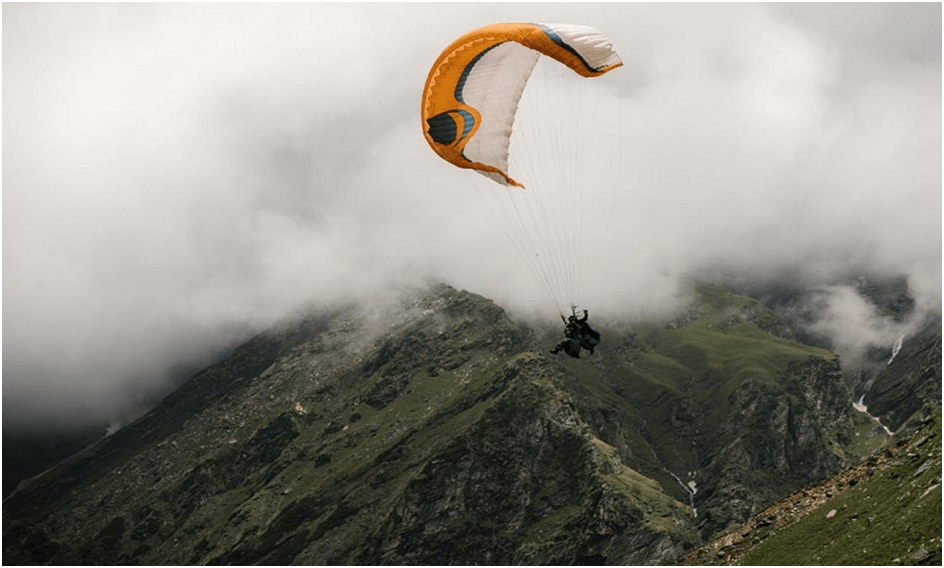 Since I am an enthusiast of good sunsets, it should come as no surprise that Bir has the most beautiful sunsets ever. But that’s not the only reason I enjoy Bir Billing so much. There are also stunning surroundings, clear skies, great people, and charming villages.

Many of you would believe that two days are enough to see everything this magnificent town has to offer, but I would disagree.

Spend a week here, and only then will you be able to even begin to explore Bir’s hidden beauties.

All about Bir Billing

Bir is a little village hidden away in a valley in Kangra, Himachal Pradesh, and Billing is a village located 14 kilometers away. However, you will discover that for a very straightforward reason, both of these settlements are frequently referred to as one. They include the second-best paragliding location in Asia and the greatest paragliding site in India.

But despite their current global popularity, they continue to be unspoiled examples of alpine beauty.

So, Bir Billing is the place to go if you want to escape to a more sedate and tranquil Himachal hill station. This location is well-known for its Tibetan roots and is a wonderful chance to see Tibetan culture in addition to being famed for paragliding.

When to go to Bir Billing?

Bir Billing is a year-round vacation spot that is open whenever you like. The optimum time to go to Bir Billing, however, mostly depends on the activities you have planned there.

The best time to visit Bir Billing is from April to July if you want to avoid the summer heat. When the weather is nice and cool, you can go paragliding, camping, hiking, and other outdoor activities.

Monsoon season is a fantastic time to visit Bir Billing if you don’t mind the rain and would prefer to escape the crowds. You can also take advantage of this time by taking a quick trek to the surrounding waterfalls and river pools.

Although the hill station turns green during the monsoon, it may not be the best time to visit because you won’t be able to get outside much. Therefore, mid-September to mid-October is the ideal time to visit if you want to take advantage of the monsoon season’s benefits while still being able to enjoy paragliding here.

The winter season, which runs from October to February, is the greatest time to visit if you don’t mind the cold and are seriously interested in learning paragliding. You will also enjoy excellent flying conditions for lengthy trips from October to December.

If Billing experiences snow before the end of December, you may have to hike for two to three kilometers in the snow to get to the takeoff location. But flying over snow-covered mountains is a very different experience.

Remember that you will be mostly residing in Chougan Village, which is around 2 kilometers from Bir Village. And there in the midst of the market, is only one ATM.

Additionally, you should bring cash with you because this ATM typically runs out of money five out of seven days. If you don’t have cash on you, you can run into problems because the majority of the stores, restaurants, and accommodations only accept cash.

On the Bir Manali highway, around 4-5 kilometers from the Tibetan Colony, there are a few ATMs. Therefore, take out enough money before visiting this location.

What to visit around Bir Billing?

Even though Bir and Billing are both small towns, there is still a lot to see and you could easily spend 3 to 5 days exploring this area. Consider the following locations while making travel arrangements to this enchanted village.

The Landing location, also known as Sunset Point, is one of my personal favorite places in Bir. This picnic area, which is 600–700 meters from the Tibetan Colony market, attracts both tourists and locals in the evening to view a breathtaking sunset.

You will see a lot of paragliders here throughout the day because this is where they land when they fly. There are a few cafés and restaurants nearby where you may eat while admiring the mountain scenery and the setting sun.

Palpung Sherabling Monastery, one of Bir’s biggest monasteries, is situated around 3 kilometers from the Tibetan Colony Market. This monastery, also known as the Bhattu monastery, is situated in the little village of Bhattu and provides the most breathtaking background in the form of the Dhauladhar hills.

It is serene and quiet here, and one can learn more about the Palpung tradition because this location is still remote from the adjacent town.

One of Bir’s hidden jewels is this out-of-the-way location that many tourists frequently ignore. Gunehar is a little village 1.5 kilometers from Bir that is frequently visited en route to the waterfall and various day treks from Bir.

The Gunehar river, which flows alongside Gunehar village and is the main supply of water for this community, lies tucked away among the mountains.

To have an interesting and relaxing experience, hike to this village and then spend some time in the Gunehar river pool. Additionally, the mountains in your immediate vicinity will give your excursion a mystical atmosphere and provide a stunning backdrop for photos.

The Chokling Monastery, one of Bir’s most well-known monasteries and situated in the heart of the Tibetan Colony, is another well-liked tourist destination. In addition, this location is home to a sizable Stupa and a stunning statue of Padmasambhava.

You can visit this monastery to meditate there or speak with the monks there to learn more about their way of life. The ideal time to visit is typically in the evening because it is more peaceful and you can see the sun setting over the stupas.

The Rajgundha Valley, which offers a clear view of both the Barot Valley and the Dhauladhar Ranges, is one of my favorite locations close to Bir Billing. Rajgundha is still not popularized, therefore there aren’t many campers or homestays there.

To camp here, one must bring their own tents, however, one must be cautious because jackals frequently prowl the area at night. The villagers that live here during the summer and part of the winter can also be interacted with.

While hiking in this mountain region, you might possibly see some animals, such as bears, jackals, leopards, and others.

There are some homestays, hotels, and hostels in bir to stay. If you can spend some extra bucks then there are resorts in Bir Billing.

Bir Billing appeared to be the ideal destination for a weekend getaway as it is .not always very crowdy.