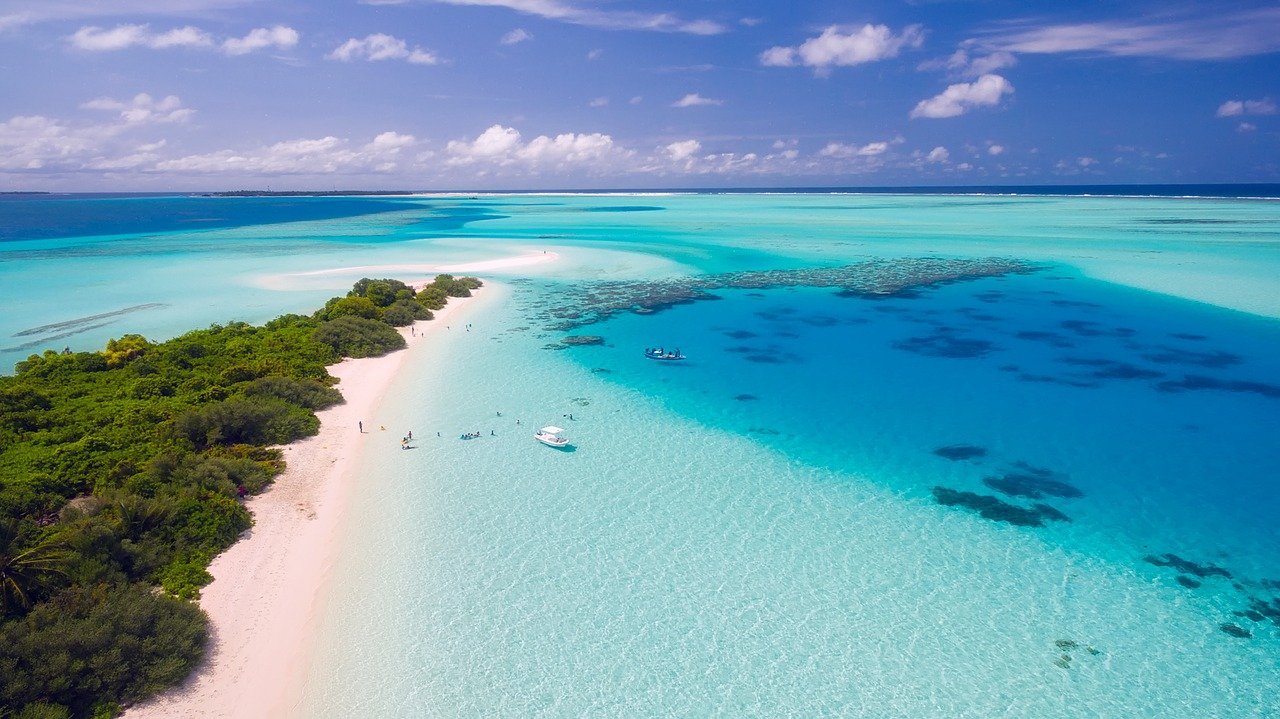 Top 10 World’s Most Beautiful Beaches That You Should Visit

The vast majority of our planet’s surface area is covered in water, and 96.5 percent of that water is found in the oceans. So, picking the nicest piece of sand real estate in the world is a little bit of a subjective choice.

There is a gorgeous beach in Kauai that requires swimming in a rough current to get to, so we left that one out of this list but included a beach that can be reached by car and has stunning sunset views.

Both urban and beach-side destinations were on our list. We also made an effort to spread the word about our favourite beaches around the world. Discover the world’s most stunning beaches, from South Africa to Bora Bora, Thailand to Turks & Caicos, with our guide to the world’s best beaches.

Tropical paradise perfection can be found in the French Polynesian archipelago that floats over the South Pacific Ocean. White-sand beaches and verdant volcanic peaks cover the island, which is surrounded by a lagoon with one of the world’s most spectacular blue and marbled azure waters.

Matira Beach is the nicest public beach in Bora Bora. On weekends, it’s a popular hangout for locals, but unless a cruise ship is parked, the sand never gets too crowded. Legend has it that one cannot miss the breathtaking sunsets over the crystal-clear waters of the turquoise lagoon.

Bora Bora has a slew of additional beaches and little islets (referred to as motus) all around it. Some of the most luxurious resorts in French Polynesia may be found here, many of which have the overwater bungalows that the country is most known for, which were invented on the neighbouring island of Ra’iatea.

When it comes to honeymoon destinations, Bora Bora tops the list, and it is well worth the expenditure and the journey time (it’s an eight-hour flight from Los Angeles).

The Turks and Caicos Islands, a group of 40 islands located directly southeast of the Bahamas, are still a British Overseas Territory. Providenciales’ Grace Bay Beach is one of the world’s most beautiful expanses of white sand, attracting visitors from all over the world.

In the brilliant turquoise waters just offshore, one of the world’s largest coral reef systems still thrives as it extends for eight kilometres in a half-crescent shape.

It is possible to go to two outstanding snorkelling areas from Grace Bay Beach, which is part of the Princess Alexandra Marine Park. There is a recognised snorkelling trail around the Bight Reef and Smith’s Reef, both of which are full of coral and tropical fish.

Be on the lookout for JoJo as well. In this location, he is a wild bottlenose dolphin, and has been seen to interact with humans who are swimming in the sea.

Last time we were on the island, we spotted him with a female dolphin companion. He’s a national treasure there.

The Potcake Place has a programme for people who miss their dogs and would like to take a stray puppy down to the beach. One of the most popular programmes offered by the animal shelter is to spend a day at the beach with a potcake puppy, which is one of the most adorable things on the planet. Adoption is available for all of the dogs.

Camps Bay Beach in Cape Town, South Africa, is one of the most beautiful beaches in the country. The water is a beautiful shade of turquoise and emerald green with deeper blue streaks, and it changes colour with the seasons.

Despite its beauty, the water is rather frigid. There are still swarms of swimmers and locals who face the surf long enough to at least cool off on the public beach, which gets a chilly Antarctic current.

Camps Bay, on the other hand, has a stunning beach that is unlike any other on the planet. The beach and seas on one side, and the Twelve Apostles rock formations on the other, loom above the coast.

Camps Bay is only one of many stunning beaches in the vicinity of Cape Town that can be reached in just 20 minutes by car. The Clifton Beaches are just as popular, but they can only be reached by descending a flight of stairs that descends steeply from the highway.

It is only accessible by longtail boat from the little peninsula where Railay Beach is located, making it one of Thailand’s most stunning beaches.

There is a stunning blue lagoon, powdery white beach and limestone monoliths (both in and out of the water), lush vegetation, and cliff and caverns around you as you arrive.

You may rock climb the cliffs or swim into underground caverns to locate secret lagoons in this beach paradise, which is popular with energetic honeymooners and couples in general for its mix of romance and adrenaline.

At least a couple nights of your honeymoon should be spent at the luxurious Rayavadee, which is located on the island.

One of Jamaica’s nicest beaches is AquaSol Beach. It has a beach and a water park on the seashore.

Reasons for Our Favorite Beach

To plan your next family outing, I strongly recommend AquaSol Beach. You can do anything from water trampolining to jet skiing to kayaking to banana boating to snorkelling to scuba diving right here, and it’s excellent for people of all ages.

It is the nicest beach in Jamaica for swimming and the safest for children. Water at AquaSol Beach is tranquil and clear thanks to the presence of jetties that keep it safe for families with little children. Lifeguards are also on the scene.

AquaSol Beach has a waterpark in addition to the beach and sea. You and your loved ones will have a wonderful time at the waterpark, which features a wide variety of water-based attractions.

Check these 10 best beaches in Jamaica.

Whitehaven Beach in Australia’s Great Barrier Reef region is consistently recognized as one of the world’s top beaches. It’s located on an island off the coast of Queensland.

There are seven kilometers of glistening white silica sand backed by turquoise water accessible only by boat, seaplane or helicopter.

The beach is located on Whitsunday Island, which is the largest of the 74 islands in the Whitsunday group. When the tides are shifting, head to Hill Inlet at the northern end of Whitehaven Beach, it is perfect for instagram photoshoot.

The hue of the water changes and swirls around the sand as the depth changes is incredibly beautiful. Tongue Point is a great place to take in the views.

Whitehaven is frequently visited as a day trip from the mainland town of Airlie Beach. Ferries, yachts, and powerboats are all options for getting to the island, which is sometimes included on day trips from Airlie Beach that involve snorkelling in the Great Barrier Reef.

On multi-day sailing charters, Whitehaven is also a common stop. The town of Airlie Beach itself is a true beach getaway, complete with a lovely stretch of sand and a wide variety of hotel and dining options.

7. The beach in Miami, Florida

The barrier island between Miami and Biscayne Bay is known as Miami Beach, and it is one of the most beautiful beaches in the United States.

With pure white sand, brilliant blue sea, and an ultra-hot social scene, South Beach is one of the most stunning beaches on the continental United States of America.

Besides sunbathing and swimming, you may also take part in a variety of water sports including jet skiing and wakeboarding on the beach.

Dining, shopping, and nightlife are all popular pastimes in South Beach. On Ocean Drive, you’ll find upscale shops, fine dining, and sidewalk cafés where you may spot locals and celebrities alike. Many of the structures along Ocean Drive date back to the Art Deco era.

Shipwreck Beach on Zakynthos, Greece’s most beautiful island can only be reached by water. Sea caves can be found in the azure waters of the glittering cove where the white pebble beach sits nestled in its crescent-shaped cove, encircled by towering cliffs.

Shipwreck Beach is located in Smuggler’s Cove on the island’s western coast and is named after a cargo ship carrying illegal cigarettes that sank in the area in 1980.

A taxi-boat ride from the Agios Nikolaos harbour on Zakynthos’ northeast shore is the only way to get there. Zakynthos Shipwreck Beach Excursion is an example of an arranged day trip.

Cottesloe Beach in Perth, Western Australia, is one of the city’s most popular sites for water sports including swimming, snorkelling, and surfing because of its mile-long stretch of sugar-white sand. The bell-shaped buoy close off the coast of Western Australia has served as a diving platform for generations of locals.

Enjoy a bottle of wine, a cold beer, or a leisurely dinner while the sun sets over the Indian Ocean. Every year the beach transforms into the setting for an outdoor art display called “Sculpture by the Sea.”

What are the options for getting there?

Cottesloe Beach is less than a 30-minute drive from Perth’s city centre, situated midway between Perth and Fremantle at a distance of around 14 kilometres (8.7 miles). The Elizabeth Quay Bus Station in Perth, Western Australia, is a popular stop for city buses.

In case you are traveling in a group of 7 to 14 friends, you should hire a maxi taxi in Perth for this beach tour.

The Fremantle Line takes less than 20 minutes to bring you from Perth Station to Cottesloe Station. Cottesloe, Perth’s Kings Park and Botanic Gardens, and Fremantle are all included in a half-day tour with AAT Kings.

Visit Sculpture by the Sea to be inspired to make castles out of the beautiful white sand. During the month of March, Cottesloe Beach transforms into an outdoor art gallery of enormous sculptures. As you stroll down the sand, you’ll come across amazing pieces of art by emerging and established artists alike.

Marine Parade is home to a slew of fashionable restaurants, several of which have stunning views of the Indian Ocean, like The Blue Duck or the Art Deco Indiana. When dining at Barchetta, you’ll almost certainly get to see one of the world’s most beautiful sunsets.

Just rugged reefs and cliffs line the shores of South Cottesloe. Surfers and kitesurfers flock to this spot to catch a glimpse of the action. It’s also a good place to go snorkelling when the water is calm, which is rare in Perth. There’s a good chance you’ll see a leafy sea dragon, which is critically endangered.

Haad Rin Beach is the most well-known of the about 30 beaches that dot the verdant island of Koh Phangan in the Gulf of Thailand. The islands of Koh Phangan, Koh Tao, and Koh Samui, all close by, are among Thailand’s most popular spots for island hopping.

A wide range of restaurants and lodging alternatives can be found near Haad Rin Beach, which is a popular destination for tourists. Backpackers and tourists from all over the world flock to the long white-sand beach and tranquil turquoise waters to relax and unwind. The water here is warm, and there are several opportunities to participate in various water sports.

Beautiful Bali, Indonesia’s most enchanting island, is home to a plethora of beaches and coves. However, Amed, located on the northeastern shore, has more than just a stunning sight from above.

You’ll see vibrant schools of fish, sea turtles, and other marine life dashing about as you dive into the transparent sea. A shipwreck awaits exploration.

In addition to the black sand beach, the turquoise water and volcanic peaks provide a stunning contrast to the lush greenery of the jungle.